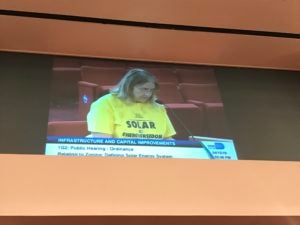 “Going solar lets homeowners save money and helps them make sure their electricity comes from with a clean energy source,” said Solar United Neighbors volunteer and homeowner, Sharon Van Smith who spoke in favor of improved permitting at a County Commission meeting. “I thank county commissioners for making it easier and more affordable.”

Miami-Dade county homeowners who want to install solar panels need approval from the county before they can begin saving money with solar. For years, the process was time consuming and made going solar more expensive than it should be. Instead of taking a few days, as it does in most places, permits for solar could take months. In response, hundreds of prospective solar homeowners and solar advocates across the county wrote to their commissioners asking them to improve solar permitting.
Commissioners listened. In September 2018, they passed a resolution to adopt a more streamlined permitting process for solar. The resolution passed unanimously.
The Commission voted last May to allow rooftop solar installations as an accessory use in all zoning categories. This was a necessary legislative step for the county to adopt the solar permitting standards and will speed the approval process.

Miami-Dade is now recognized as a national leader for streamlining solar installations for businesses and homeowners,” said Commissioner Levine Cava. “This was a great collaboration between Solar United Neighbors of Florida, the County’s Building Permit Division and Office of Resilience to remove barriers to quick, efficient solar permit reviews, and a great step toward a clean energy future for our county.”

Homeowners interested to learn more about going solar can join the Miami Digital Solar Co-op. With the support of non-profit Solar United Neighbors, co-op members learn about solar technology and if going solar is right for them. The group is free to join and joining is not a commitment to buy panels. Solar United Neighbors has issued a request for proposals on behalf of co-op members. The group is currently seeking an installer to serve the co-op. Co-op members will meet to review each bid and select the installer whose bid best serves the needs of co-op members. The chosen installer then develops personalized proposals for each member. The installer bases the proposal on their selected bid. Co-op members review their proposal and decide if going solar is right for them.

Solar United Neighbors co-ops have helped install more than 250 solar systems across South Florida. The organization has helped more than 1,500 homes install solar across the state since 2015.